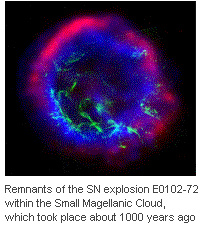 All present elements, with the exception of hydrogen, deuterium and helium, have been synthesized in stars. Elements heavier than iron however cannot be formed through exothermic nuclear fusion. They are rather formed in massive stars at the end of their life, when the star first implodes under its own gravitational pressure and then explodes in a cataclysmic cosmic event - a type IIa supernova.

While the single phases of the stallar life are well understood, model calculations for supernovae (SN) are still a problem. The explosive energy of the star is mainly defined through a single parameter at the critical point just before the collapse: the number of electrons per baryon. This ratio is defined through the number of electrons which was previously converted to neutrinos through electron capture (EC) reactions. As neutrinos can leave the stellar core with almost no further interaction, they can carry away gravitational energy, and thereby a part of the explosive power, in form of kinetic energy.

The precise knowledge of weak EC rates for nuclei of the iron/nickel region is of central importance for the SN model calculations. This knowledge is still incomplete, and indeed all simulations of supernovae are not capable of generating an explosion without any additional "fine-tuning".

The EC rates are however also accessible by laboratory experiments. Hadronic scattering processes, e.g. proton-nucleus scattering at energies between 100 and 500 MeV), proceed, under certain kinematic circumstances, through just the same interaction operators which also describe the weak EC process. In nuclear physics, we call these processes "Gamow-Teller"transitions.

In order to elucidate the structure of such processes, our group conducts experiments at the Kernfysisch Versneller Institute (KVI) in Groningen (the Netherlands). The EUROSUPERNOVA collaboration has developed a novel detector system for a magnetic spectrometer. Utilizing proton and deuteron beams from a cyclotron, a multitude of projects with extensive experimental programs, have been launched.

Furthermore, EC rates from nuclei of the nickel-iron region determine the electron-to-baryon ratio in type Ia SN progenitors, which in turn fixes the composition of the explosion ejecta. In type Ia SNe, which are interpreted as thermonuclear explosions of accreting white dwarfs in binary stellar systems, EC occurs behind the burning front.