and its application for

The research of Joachim Jose and his group at the Institute of Pharmaceutical and Medicinal Chemistry at the WWU Münster is mainly focused on the development and the application of a new platform technology named Autodisplay. Autodisplay represents an efficient tool for the surface display of recombinant proteins in gram negative bacteria, in particular E. coli.  It is based on the secretion mechanism of the autotransporters, a family of proteins that was discovered by Joachim Jose and co-workers during his time at the Max-Planck-Institute for Biology in Tübingen. 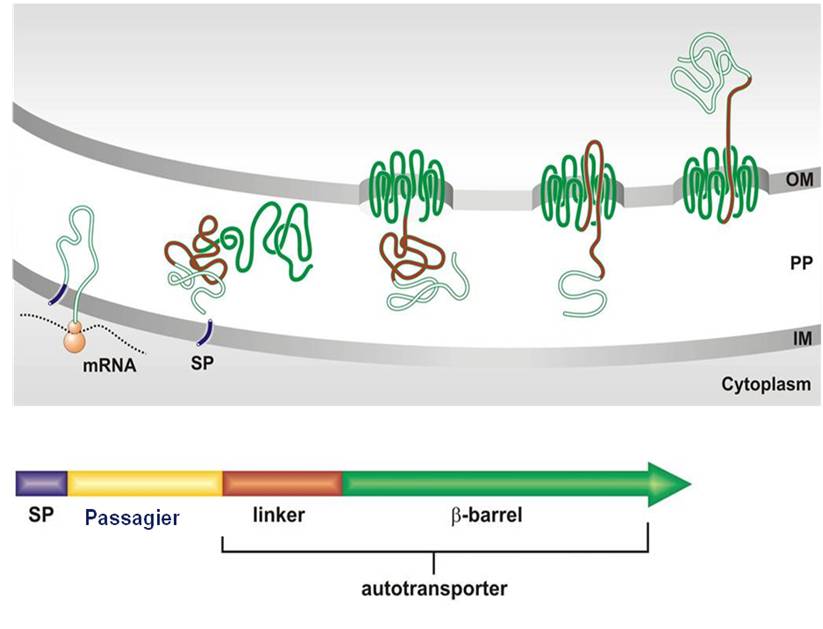 Proteins that are transporting themselves to the cell surface are catalogued as autotransporters. They are synthesized within the cell as a polyprotein precursor with a typical signal peptide (SP) at the N terminus that directs the protein across the inner membrane (IM). Subsequently, the C terminus of the precursor folds into the outer membrane (OM) as a porin-like structure, a so called ß-barrel, which facilitates surface translocation of the passenger domain.  By simply replacing the coding region of the natural passenger by the coding region for a recombinant protein in the precursor gene, the recombinant protein can be transported to the cell surface very efficiently and in high yields. This is what became known as Autodisplay.

A unique feature of Autodisplay in comparison to other surface display tools is that the anchoring domain is not covalently fixed at the cell surface, but is able to move in the plane of the outer membrane. This enables the functional display of multimeric proteins i.e. homodimeric, up to homononameric or heterotetrameric proteins, by simply expressing the monomeric genes as fusions with the autotransporter domains. This is what we called a passenger-driven dimerization or multimerization.

Another unique feature of Autodisplay was discovered when bovine adreodoxin was displayed as a recombinant passenger. Autodisplay enables the surface display of functional proteins or enzymes, that contain inorganic prosthetic groups, e.g. iron-sulfur groups, flavins or porphyrins  as  well. Therefore, Autodisplay can be used for the surface display of CYP enzymes or FAD containing oxidoreductases, which is not possible by any other surface display tool known so far.
Finally, a major advantage of Autodisplay is its high expression rate, which yields 105 -106 functional recombinant proteins at the cell surface per single cell of E. coli, without disturbing cell viability of cell integrity.

A major application field of Autodisplay is the development of test assays for enzyme inhibitors by displaying the human drug target at the cell surface of E. coli. This provides a rapid and simple access to the human target enzyme for which an inhibitor is searched. Whole cells of E. coli displaying the human enzyme can be used for inhibitor testing, as the enzyme is free to access at the cell surface for any kind of small (or larger) molecule. Purification or any other processing of the target enzyme is not necessary.  Moreover, Autodisplay provides access to expression of human target enzymes that are difficult to express by other expression systems due to the formation of inclusion bodies for example. In most cases we developed test assays for human targets using instrumental analytics, always with the aim to provide a miniaturized tool that could be as well automated for HT screening.

Protein-Protein-Interactions (PPI) are involved in basically all biological processes within the human body. Recent studies estimate the human interactome to consist of around 130.000 – 650.000 different PPI. Addressing selected protein-protein interactions (PPIs) by small molecules that bind and interfere appears to be a promising and emerging target for drug discovery. In contrast to the active site of an enzyme or the ligand binding site of a receptor, however, the PPI interface in general does not represent a cavity, but rather a surface exposed domain or area of the protein. Hydrophobic patches are important in such interfaces, but the number and role of hydrogen bonds and water molecules can be rather different from classical cavities. Furthermore, the influence of protein flexibility and induced fitting is more difficult to predict, than it is enzymes or a receptors.

Applying bacterial surface display, click chemistry and flow cytometry we developed screening assays to identify small molecule PPI inhibitors for human cancer target proteins. The assays developed could be used to identify inhibitors of heterologous PPIs, as in the case of human protein kinase CK2 and transcription factor Myb, as well as inhibitors of homologous PPI as in the case of human HSP90. KD values of the new compounds identified with the corresponding PPI targets were determined by microscale thermophoresis (MST). This strategy led to new potent small molecule PPI inhibitors in the nanomolar range that turned out to be active in a mouse model as well as in primary human leukemia cells.

The strategy as we applied here, combining bacterial surface display, click chemistry and flow cytometry for the rapid screening for PPIs and IC50 determination, followed by MST for KD measurement of the best candidates appears to be a practical and valuable way to identify novel small molecule inhibitors of PPIs in general .

Autodisplay based assay as developed for screening compounds

Whole cell biocatalysts for synthesis of drugs and building blocks

Another major application of Autodisplay is the surface display of enzymes on E. coli in order to obtain whole cell biocatalysts for synthetic purposes. These are not restricted to human enzymes but can comprise biocatalysts of a wide variety of sources including enzymes with prosthetic groups as P450 enzymes (CYPs) or even complex enzyme systems. 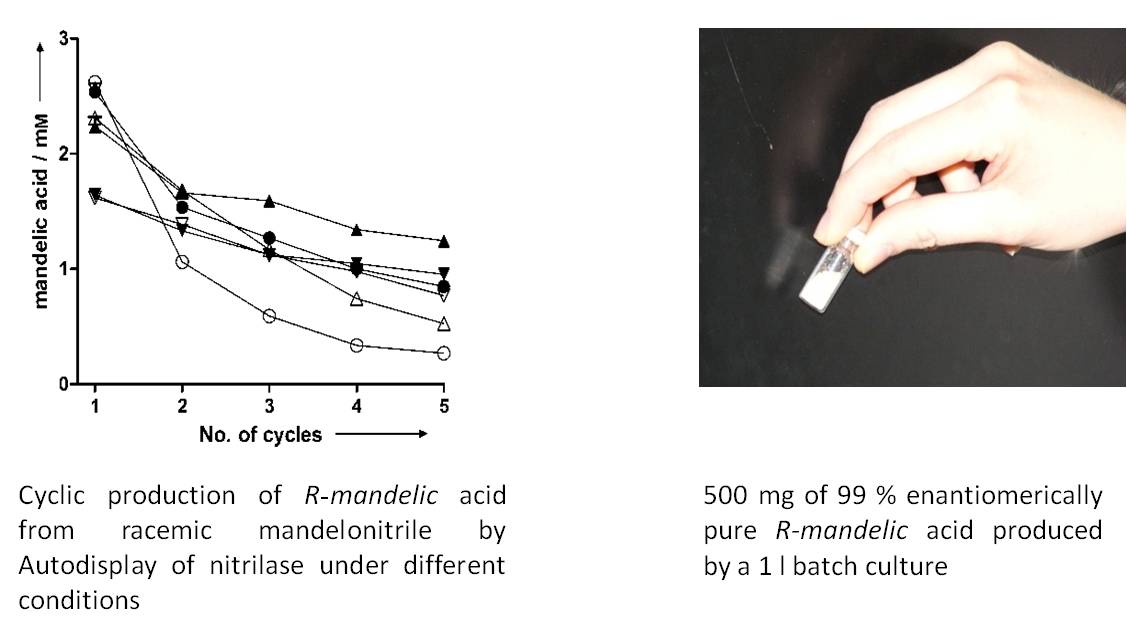 In this context it is remarkable, that the outer membrane of E. coli provides sufficient membrane environment to human P450s in order to be enzymatically active. This gives a new access to the synthetic potential of this highly interesting class of enzymes. The list of enzymes displayed on E. coli in an active form contains:  - Esterases - Lipase with its corresponding foldase  - CYP106A2 -  Nitrilases of different origin - Prenyltransferase - Sorbit dehydrogenase - Pyranose Oxidase -  NADH Oxidase - various human Hyaluronidases - Phosphotransferase and others.

Due to the robustness of the cells when using Autodisplay, they can be harvested from a reaction mixture and transferred to a fresh assay, which results in a cyclic exploitation of the whole cell biocatalyst. Synthesis of up to 500 mg product can be facilitated by batch cultures in a laboratory scale, but cells with autodisplayed enzymes can be used for fermentation purposes as well.

Due to the large number of different enzymes displayed on E. coli in an active form by Autodisplay,  a sequential synthesis  approach is possible, in which different whole cell biocatalysts are used as modular synthesis tools. A substrate solution is driving along this module  in a continuous process conduct leading to new compounds that can be tested on their inhibitory potential in an assay as described above, finally yielding new chemical entities and - most hopefully - new lead structures.

Key publications on whole cell biocatalysts for synthesis of drugs and building blocks:

The highly acclaimed prospect of renewable lignocellulosic biocommodities as obvious replacement of their fossilbased counterparts is burgeoning within the last few years. However, the use of the abundant lignocellulosic biomass provided by nature to produce value-added products still faces significant challenges. One of the crucial challenging factors is in association with the expression levels, stability, and cost-effectiveness of the cellulose-degrading enzymes (cellulases). Here the surface display of ley enzymes offers major advantages. The enzymes have free access to their biopolymeric substrate and no laborious and costly purification of the enzymes is necessary. Moreover, cells displaying the enzymes can be recovered from the products and applied to multiple cycles of reaction. Finally cells displaying different enzymes can be combined in varying combinations, allowing a simple adjustment to the biopolymer as targeted as substrate, which allows an individual and rapid adjustment of reaction conditions in a particular biosynthetic approach.


Key publications on degradation of biopolymers by surface displayed enzymes:

We succeeded in the surface display of small peptide libraries as well as in the surface display of enzyme libraries. In case of using Autodisplay, such libraries are actually consisting of different cells of E. coli, wherein each cell is bearing a different variant at the cell surface in high numbers. Due to the surface exposure of the variant, the library of E. coli cells can be screened on binding a molecule of interest e.g. a target enzyme. In case the target has been labeled before with a fluorescent dye, fluorescence active cell sorting (FACS) can be used for selecting positive variant. By simple DNA sequencing the primary structure of the variant displayed at the cell surface can be unveiled. Repeated steps of variation and selection will lead to stepwise improved variants design for a specific purpose, thus complying with the strategy of directed evolution. This approach is not restricted to screening by binding as one would assume for enzyme inhibitors, which are known to bind their target enzyme very strongly. Any other adequate selection procedure will do, as long it is suitable for high throughput. Moreover, due to the option of passenger-driven dimerization as described above, combinatorial libraries can be expressed e.g. combinatorial libraries of antibody heavy and light chains, which can subsequently be screened on tumor cell targeting. 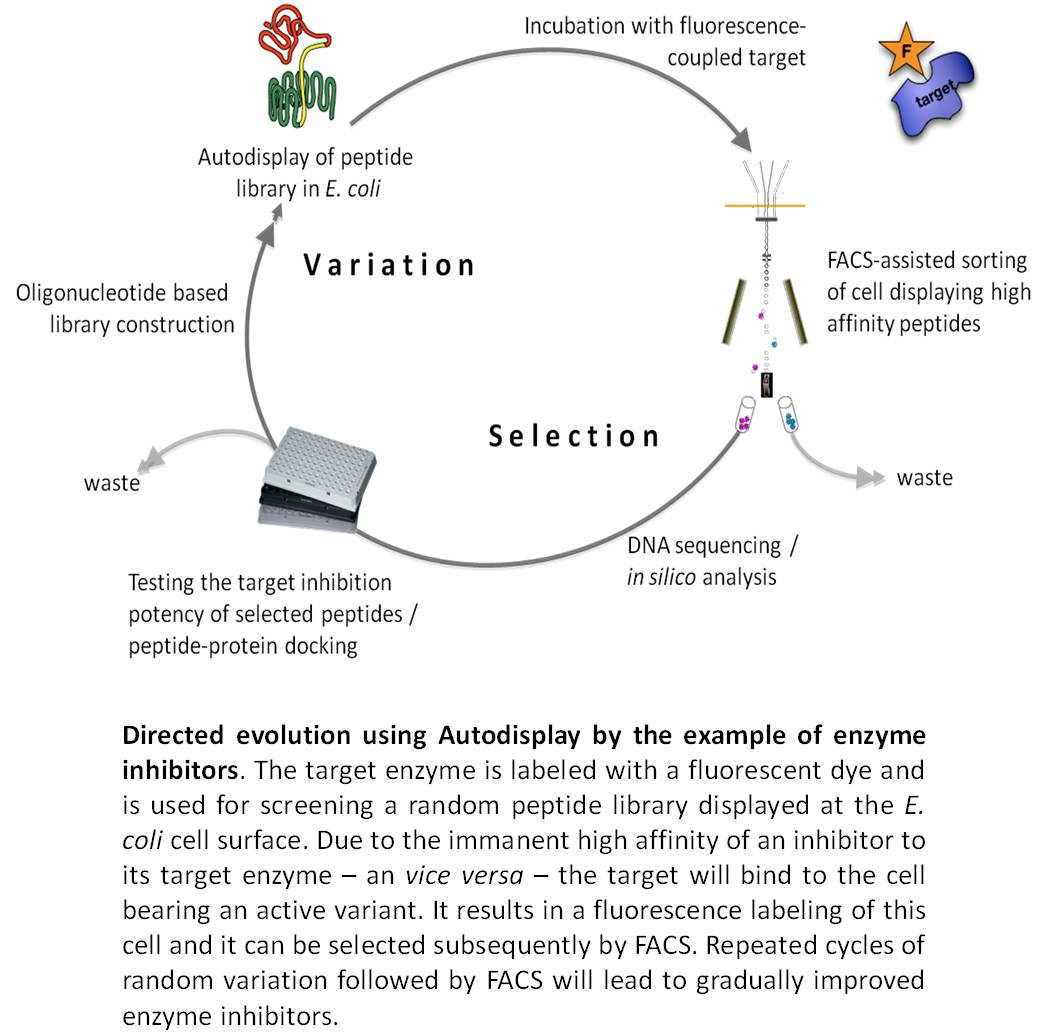 We successfully applied this approach to identify new inhibitors of human cathepsin G, a target in chronical inflammatory diseases. At current, we are applying this strategy to identify new inhibitors of human protein kinase CK2, a promising target in neoplastic disease. Moreover, we succeeded in displaying combinatorial antibody libraries and were able to demonstrate tumor cell targeting by whole cells of E. coli displaying an antibody variant. 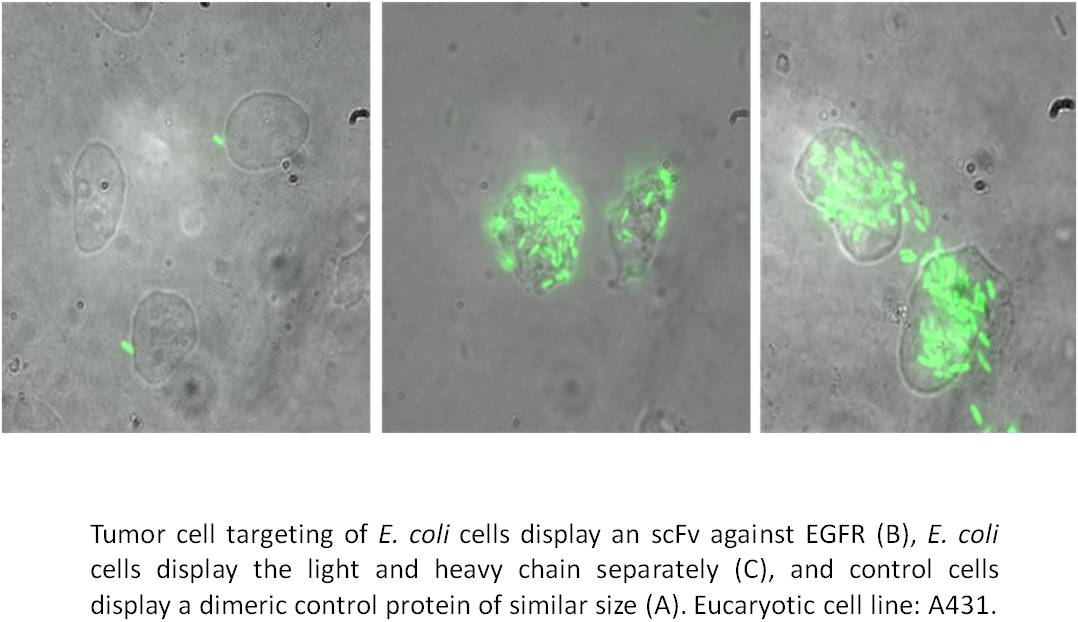 Key publications on directed evolution of enzyme inhibitors and biocatalysts:

Biosensors utilize the highly selective binding affinity of antibodies for the molecular recognition of a target analyte in a complex mixture such as serum. For the sensitive detection of a target analyte at a very low concentration, the antigen binding sites (Fab region) of antibodies should be directed to the analyte solution (‘orientation control’) and the antibodies should be immobilized with a high density (‘density control’).  This can be solved by Autodisplay, because here, the antibody expressed is to more than 99 % directed towards the outer surface of the outer membrane. Because the outer membrane of E. coli is asymmetric, the outer surface is comprised of LPS, whereas the inner surface contains phospholipids and lipoproteins, this can be exploited for a directed coating of solid matter surfaces of biosensors, including immunoaffinity chips. 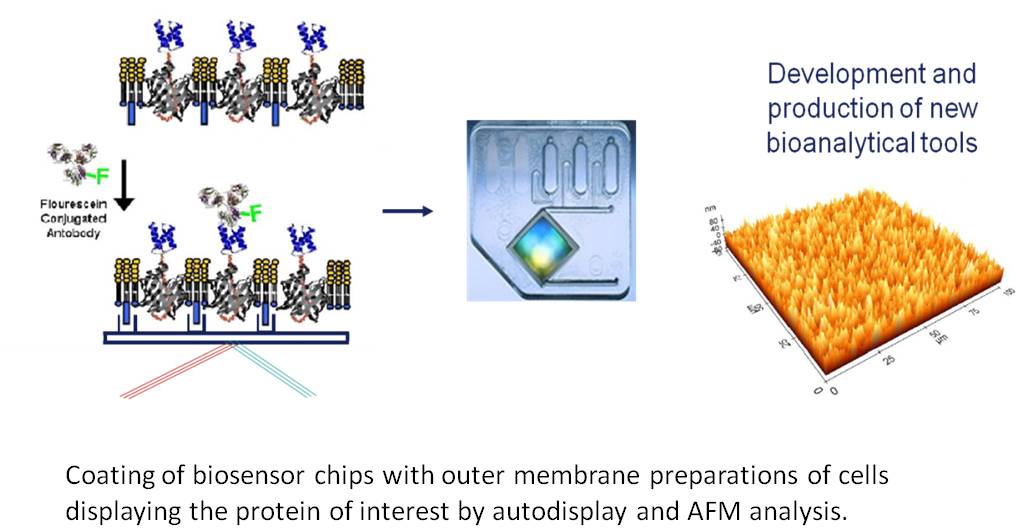 This approach can also be used for coating 96 well microplates with an antigen in order to develop new non-sandwich ELISA. But in such case also whole cells of E. coli can be used, that are displaying the antigen of interest, as a simple and rapid source for providing the antigen. As described before, the advantages of Autodisplay such as high expression levels, broad application and robustness of cells displaying the recombinant protein will account for successful application. 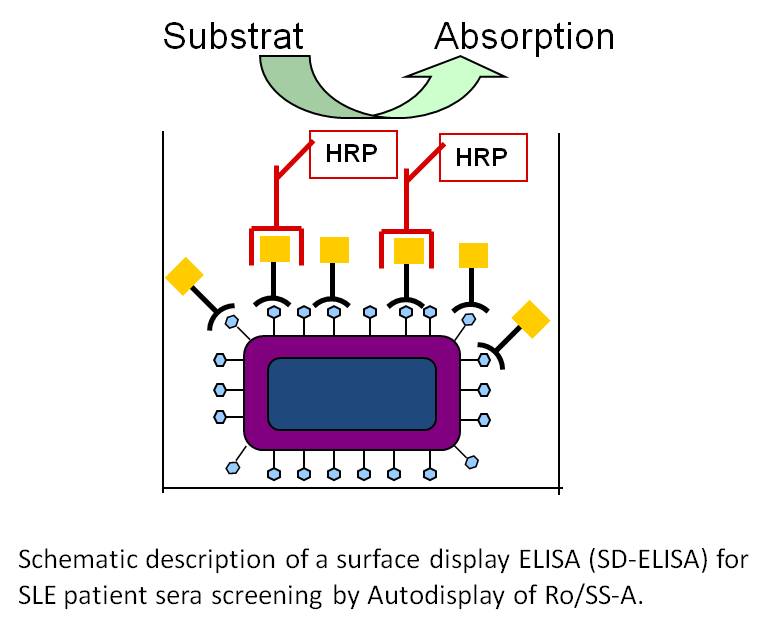