Dr. Klaus-Holger Knorr appointed to the professorship in Hydrology

Effective on August 1st 2018, Klaus-Holger Knorr was appointed to the professorship in Hydrology by the Rector of the University of Münster, Professor Dr. Johannes Wessels. The professor in Hydrology is head of the Ecohydrology & Biogeochemistry Research Group at the Institute of Landscape Ecology, as well as of the central laboratory of the institute. Klaus-Holger Knorr has been responsible for these tasks as temporary acting head of the research group since August 2016. The institute welcomes Klaus-Holger Knorr in his new position and we wish him all the best for this new start. We are looking forward to future collaboration. [14.01.2019]

Klaus-Holger Knorr has qualified as a professor

Dr. rer. nat. Klaus-Holger Knorr (Ecohydrology and Biogeochemistry Research Group)was awarded the Venia legendi for Biogeochemistry by the Department of Geosciences on 29.11.2017 with a cumulative thesis on the topic:"Using organic matte quality, stable isotopes, and electron transfer processes as tools to understand mechanisms of element cycling in wetlands". Congratulations! [30.11.2017]

The Ecohydrology & Biogeochemistry group in the EGU Imaggeo blog

A photograph of one of the field sites of the Ecohydrology and Biogeochemistry Group was selected for the Imaggeo-blog of the EGU (European Geosciences Union). Here, scientists provide insights into their ongoing work using selected photographs and in a language also accessible for the broad public audience.[12.10.17]

On July 20th, 2017, Simona Bonaiuti was awarded her doctoral degree. Her dissertation is about "Transport, anoxia and energy control on anaerobic respiration and methanogenesis in anoxic peat soils". The project was funded by the German Research Foundation (DFG), grant no. BL 563/20 (grant awarded to Prof. Christian Blodau). We congratulate on the successful graduation! We also want to acknowledge the help of the members of the board of examiners. [31.07.2017]

Ecosystems are increasingly influenced by climate change and the climate can be influenced by ecosystem change. Feedbacks of this kind are a focus of biogeochemical research worldwide. The documentary illustrates how research proceeds in this field and gives answers on questions that are raised: What is our motivation to address scientific questions? Why do we investigate Canadian peatlands? What are the steps of a successful research project in this field? How does the teamwork between students and scientists look like? How does a day in the field look like? What have we learned from our investigations? And after all: Can science be fun?

An obituary is avalible in german language.

An obituary in English contributed by Tim Moore is available at the McGill University, Montreal, Canada

[20.11.2015] The German Research Foundation supports a research project of the Ecohydrology and Biogeochemistry Group (PI: Christian Blodau) for a period of three years.  Recently it has been discovered that inland waters cover much larger areas than previously assumed and likely represent significant sources of carbon dioxide and methane to the atmosphere; they may even provide relevant feedback in the climate-biosphere system.  The seasonal and spatial dynamics of carbon fluxes of small and shallow inland waters is poorly understood, however.  To begin rectifying this knowledge deficiency, the project will quantify the gas exchange between sediment surface water and the atmosphere in a shallow model system and establish controls on CO2 and CH4 emission and carbon sequestration.  We focus on periods and zones that have great influence on annual balances of carbon, such as ice breakup, spring and fall. To this end, recent methodological advances in high resolution gas flux measurements will be utilized. Carbon fluxes will be related to environmental variables and internal biological and physical dynamics. Methanogenesis, methane oxidation and transport are key processes for the greenhouse warming potential of these systems and will be a focus of the investigations.  To this end also 13C stable isotope balances will be employed.

[27.10.2014] From january 2015 on, the working groups Hydrology and Ecosystem Research from ILÖK together with the project partners Gramoflor and Stiftung Lebensraum Moor can conduct their research on the establishment of hummock peat mosses in rewetted cutover bogs with financial support from Deutsche Bundesstiftung Umwelt (DBU).
more about the project

[26.11.2013] The German Academic Exchange service supports a research cooperation of the Hydrology Group (Christian Blodau) with scientists from McGill University in Canada for a duration of two years. The funding supports investigations regarding the interaction between hydrologic change and ecosystem processes in northern peatlands. The research aims at identifying long-term ecosystem level controls on trace gas emissions at Canadian field sites and will characterize coupled ecosystem and biogeochemical dynamics using the recently developed PEATBOG simulation model. Youtube...

CANDYbog - Carbon, water and nutrient dynamics in vascular plant- vs. Sphagnum-dominated bog ecosystems in southern Patagonia - Science at the end of the world

[07.10.2013] The German Research Foundation will fund a 3-year joint on south hemispheric peat bog ecosystems in Tierra del Fuego. The partners are the Working Groups Ecosystem Research (Till Kleinebecker) and Hydrology (Christian Blodau) of the Institute of Landscape Ecology and the Research Group Regional Hydrology (Lars Kutzbach) of Hamburg University. In the interdisciplinary project we will focus on carbon, water and nutrient dynamics of vascular plant- vs. Sphagnum-dominated bogs. In order to do this, we will utilize a broad range of approaches and methods which include gas flux measurements, peat core dating and measurements of the photosynthetic activity as well as field and laboratory experiments. Project Homepage. 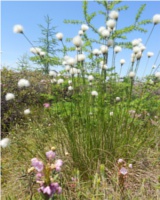 [02.05.2013] The German Science Foundation supports a research project of the Hydrology Group (Christian Blodau) for a duration of three years.  Climate models predict substantially wetter winters and drier summers in wide areas of the northern temperate and boreal zone, entailing a stronger hydrologic dynamics in peatlands. As a consequence changes in vegetation communities, water and carbon cycle are expected and may cause a positive feedback on climate change. In the project we will investigate a peatland in Ontario that has undergone 60-year wetting by establishment of a reservoir and study the effects of a winter-wetter and summer-drier climatic scenario. The carbon cycle will be quantified and the controls on the gas exchange be identified using a range of techniques including stable isotope analyses. We  plan to use the acquired knowledge to further develop a simulation model of coupled water and carbon cycling in peatlands (PEATBOG).

Regulation of carbon sequestration and methane release in peat soils

[08.01.2013] The German Science Foundation supports a research project of the Hydrology Group (Christian Blodau) for a duration of three years. Within the project, which covers both hydrological and biogeochemical aspects, it will be tested to what extent gas and water transport control the mineralisation of organic substance and the release of methane from peat soils.  The relation will be causally and mechanistically analyzed using both stable isotope and thermodynamic approaches. It is planned to use the acquired knowledge to further develop simulation models of coupled water and carbon cycling in peatlands.