a. What are Spin Waves?

To answer this question we first have to ask what the spin is. The spin is a quite strange parameter. Every electron carries spin ½. It’s most intuitive to imagine the spin as a rotation of the electron around its axis although this cannot be true because then the electron would rotate faster than the speed of light which is considered as being impossible in reality. But it’s a picture one can work with. Strictly speaking the spin is a quantum mechanical value and has no counterpart in classical mechanics. 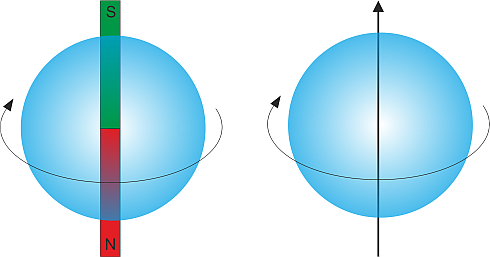 It is not convenient to draw the dipolar magnetic moment as a bar magnet, instead it is drawn as an arrow pointing from the north to the south pole.

In crystalline materials atoms are arranged in a periodical lattice. In some atoms all spins of the electrons in their shells compensate each other. These materials are called dielectric they do not posses any elementary magnetic moments and behave diamagnetic when placed in an external magnetic field. But there are also atoms in which the spin of the furthermost electron is not compensated. These atoms can be imagined as if they carry the spin ½ and have therefore a dipolar magnetic moment. In the case that these atoms are organized in a crystalline lattice, we can imagine the crystal as a lattice with a dipolar magnetic moment attached to each lattice site. 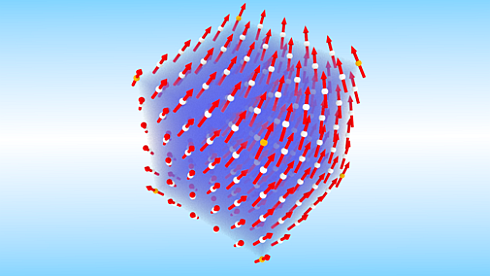 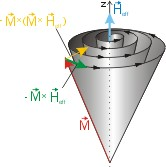 These deflected spins do not just go back into their initial equilibrium position but precess around the direction of the external magnetic field. The frequency with which they precess is an important property of a spin-wave. This precession doesn’t last forever, after a certain time the precessing spins cause the atoms they are attached to, to vibrate on their lattice site. This vibration of atoms in a crystalline latticed is perceived as heat. In this way spin waves decay into heat after a certain time.

In the last section it was already mentioned, that Spin Waves can be treated as particles in the wave particle duality limit. So the next section treats the question:

What is wave particle duality?