d. How does coherence manifest in magnon Bose Einstein Condensates?

We have already heard that a major property of Bose Einstein condensates is their coherence.

In physics we distinguish between temporal and spatial coherence. Spin waves have as already mentioned two major properties, the first one the frequency is a temporal one. An mBEC consists of millions of individual magnons, which in turn consist of several precessing spins. The frequency of a spin wave or a magnon specifies how often a spin in a spin-wave precesses around his presession axis per time interval. If we now look at two different magnons with the same frequency their precessions must not be synchronized at all, in fact in most cases they are not. Especially if we take into account the finite lifetime of a magnon we realize, that the precession of two spins belonging to different magnons must not be connected to each other.

On the contrary, the magnons in a BEC are not individual anymore. Their precessions are synchronized. This means, that spins from different magnons in a condensate precess parallel to each other.

We have already learned that the precession frequency of spins coincides with the frequency of electromagnetic radiation at microwave frequencies. Due to the laws of electrodynamics an alternating magnetic field always produces an alternating electric field and vice versa. In that way the precessing spins create a strong electromagnetic wave at microwave frequencies. This microwave radiation can then be easily detected with an antenna. This experiment was carried out by Oleksandr Dzyapko in 2008. The result is presented in the figure. 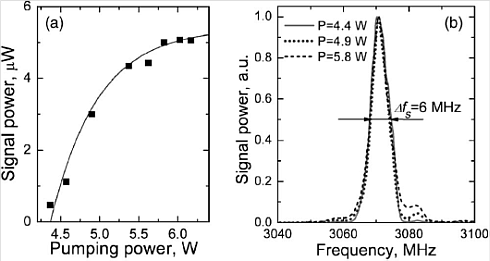 In the second part of the picture we can see, that the frequency distribution of the emitted microwave power is very narrow. This reflects the fact that all spins in the condensate precess with the same frequency which consequently means that all magnons building up the condensate have the same energy.

In summary, the existence of temporal coherence leads to monochromatic microwave radiation. The specialty now is that the frequency of emitted radiation does not depend on the frequency of microwaves used to create the condensate, but on the value of the external magnetic field, which determines the energy of magnons in the lowest energy state.