In nonlinear optics new effects such as self-focusing and frequency conversion occur due to a nonlinear light matter interaction. Prerequisites for nonlinear optical effects are in general high light intensities that can be achieved with laser pulses and a medium with a high nonlinearity. The second order nonlinear response of a material (so called Χ(2) nonlinearity) leads to the generation of new optical frequencies such as the second harmonic (SHG: Second Harmonic Generation). For an efficient frequency conversion process an effective phase matching condition should be fulfilled. We are structuring and investigating the linear and nonlinear properties of crystals to tailor them for specific nonlinear photonic applications. The crystals are structured typically by light as well as by electrical fields. We are modulating the refractive index of the crystals permanently by direct laser writing with fs laser pulses or reversible with cw laser light using the photorefractive effect. The Χ(2) nonlinearity can be spatially modulated in ferroelectric crystals by applying an electric field above the coercive field. Thus, we are designing nonlinear photonic structures of different dimensions (1D/2D) and with a different degree of order of the nonlinearity (from periodic to disordered) exhibiting sophisticated phase matching conditions (.modulated Χ(2) materials). The structure of the nonlinear photonic crystals is examined with a special kind of SHG laser scanning microscopy (.SHG microscopy). We are developing advanced phase matching concepts using light-induced gratings that are acting either as diffraction gratings (noncollinear phase matching) or as light-induced quasi-phase matching gratings with a modulated Χ(2) nonlinearity. 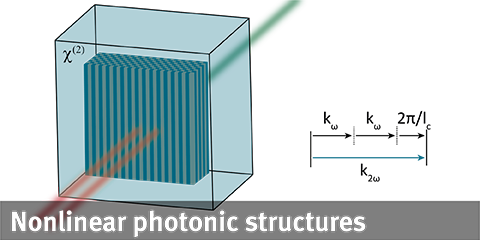 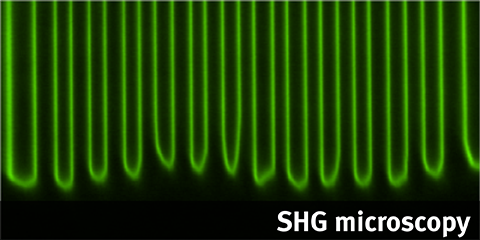