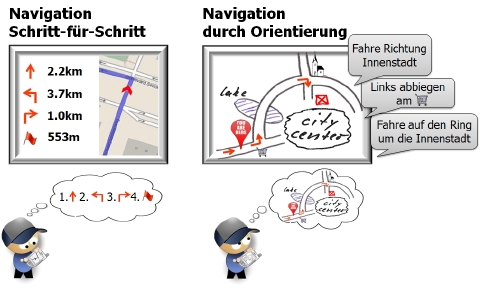 “Turn right after 180 meters. Follow the course of the road for six kilometers. Keep left.” These kinds of navigation instructions direct us successfully to our destination. However, many users of today’s navigation systems feel disoriented, having no sense of direction, and blindly trusting the instructions. “It is no surprise”, says Angela Schwering (Institute for Geoinformatics). “These instructions guide us successfully to the destination, but they do not communicate any knowledge of the place.” Although navigation systems have gone through tremendous development, they suffer from fundamental shortcomings: State-of-the art navigation systems still adhere to the principles of turn-by-turn navigation. At each decision point, users receive the next turn instruction guiding them towards the destination. The user has no orientation and no overview of the surrounding environment. Schwering argues that turn-by-turn navigation is cognitively inadequate: When humans perform wayfinding, they do not execute instructions sequentially one after another, but they learn the spatial configuration during wayfinding and build up cognitive maps to orient themselves. Schwering is developing a new wayfinding method to support people in orienting and learning their environment. The European Research Council is funding her project “Wayfinding Through Orientation” with an ERC Starting Researcher Grant for five years with more than 1.3 Mio. Euros.

“Most people would like to understand what they do”, says Angela Schwering. Wayfinding Through Orientation supports the acquisition of spatial knowledge and cognitive mapping for advancing the user’s orientation. Orientation instructions such as “Go towards the city center. Turn left at the supermarket and circumnavigate the city center until you reach the university hospital”, communicate the route using landmarks and information which are more meaningful to the user. This information serves as anchor points for people to build up a mental map of the environment. The new navigation system shows a simplified and schematized map of the environment to highlight relevant information. “The project will be carried out in three steps”, explains Angela Schwering. “First, we will collect wayfinding instructions given by humans to empirically analyze what kind of information induces orientation in humans. Afterwards, we develop computational approaches to generate and visualize orientation information automatically. Orientation information is different to spatial data stored in geographic information systems, because it does not have a consistent level of generalization, it is schematized and it refers to vernacular, vague places not included in traditional maps. At the end, we evaluate Wayfinding Through Orientation by determining its effect on peoples’ ability to solve wayfinding tasks that require orientation and cognitive mapping.”