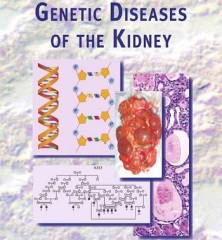 Genetic Diseases of the Kidney

Genetic Diseases of the Kidney identifies and analyzes genetic abnormalities causing renal diseases in human subjects. Although in a sense the genome contains all the instructions required for the formation of a phenotype, the information is encoded in an extremely complicated fashion. In primary genetic diseases, the genetic instruction specifies a phenotype clearly linked with a discreet lesion confined to the kidney. However, the genetic disturbance may be imbedded in a complicated physiologic ensemble, so that the nexus between the genetic disturbance and the phenotype may be obscured; in consequence, the causal sequence is extremely difficult to unravel. In many instances the renal disease is one component of a complicated systemic hereditary disease, either monogenic or polygenic. Indeed, renal disease may arise as the sum of minor inputs from many different, seemingly unrelated genes, so that the genetic contributions may be difficult to identify. Confounding the problem further are environmental influences, originating either in the chromosomal environment from modifier genes, or in the extra-chromosomal environmental from intrauterine or postnatal influences. These considerations have determined both the organization of the text as well as the detailed description of the genetic disorders and the physiologic derangements that emerge.