h. How can one achieve the conditions for Bose Einstein Condensation?

It was already pointed out in the section about quantum statistics, that quantum effects take place in atomic gases only under extreme conditions. We have seen that the thermal deBroglie wavelength has to become the same order of magnitude as the mean distance between particles.

To achieve that one can either try to increase the density of the atoms in the gas. This is rather not practicable, as it is extremely difficult to increase the density of a gas by more than two or three orders of magnitude. Moreover a gas can become liquid or even solid if the external pressure, necessary for compression of the gas, becomes too big. In this case all our theoretical considerations fail as they are only valid for non interacting particles while particles in a fluid cannot be considered as not interacting.

Hence the method of choice is increasing the deBroglie wavelength, by decreasing the temperature. We have already seen that extremely low temperatures are needed in order to get the atoms in a gas into the quantum regime where quantum mechanical effects start to occur. The temperatures at which Bose-Einstein condensation can be observed are way lower.

And that’s how it came that Bose-Einstein condensation was first observed in a dilute atomic gas composed of rubidium atoms by Anderson and co workers. The conditions were quite extreme; the density of the atomic gas was 1012 atoms per cubic centimeter it is 10 million times lower than that of a gas under standard conditions. Consequently the temperature necessary for BEC is much lower than that calculated in section 1c).

Condensation was observed at a temperature of

This is nearly absolute zero. But this means that any interaction with the environment would result in an increased temperature and hence destroy the condensed state.

Due to this the atomic cloud is confined in a magneto-optical trap. This trap consists of magnetic fields produced by current carrying coils and laser beams which are also used for cooling.

In this way the condensate levitates freely in space and does not come in touch with any material that surrounds it. A technique that is also used in some types of fusion reactors were it is needed to avoid a acooling of an ultra hot plasma due to interaction with its environment. 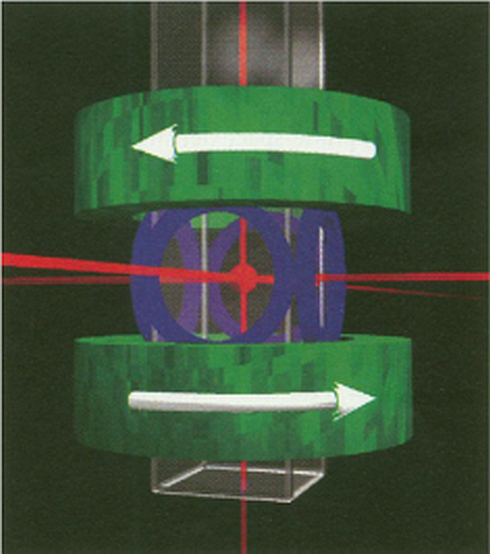 The figure above shows the experimental setup of a magneto-optical trap. The current carrying coils (green and blue) produce a static magnetic field. Laser beams (red) are used for additional confinement and cooling. At the position where all laser beams cross an atomic cloud can be trapped.

Now, that we know how a Bose Einstein Condensate can be created, the next question is:

What are the properties of a Bose Einstein Condensate?