Modern computer systems become increasingly distributed and heterogeneous by comprising multi-core CPUs, GPUs, and other accelerators. Current programming approaches for such systems usually require the application developer to use a combination of several programming models (e.g., MPI with OpenCL or CUDA) in order to exploit the system's full performance potential.

dOpenCL (distributed OpenCL) is a novel, uniform approach to programming distributed heterogeneous systems with accelerators. It transparently integrates the nodes of a distributed system into a single OpenCL platform. Thus, dOpenCL allows the user to run unmodified existing OpenCL applications in a heterogeneous distributed environment. Besides, it extends the OpenCL programming model to deal with individual nodes of the distributed system. As dOpenCL seamlessly integrates existing vendor-specific OpenCL implementations, it is forward-compatible to even the latest devices. 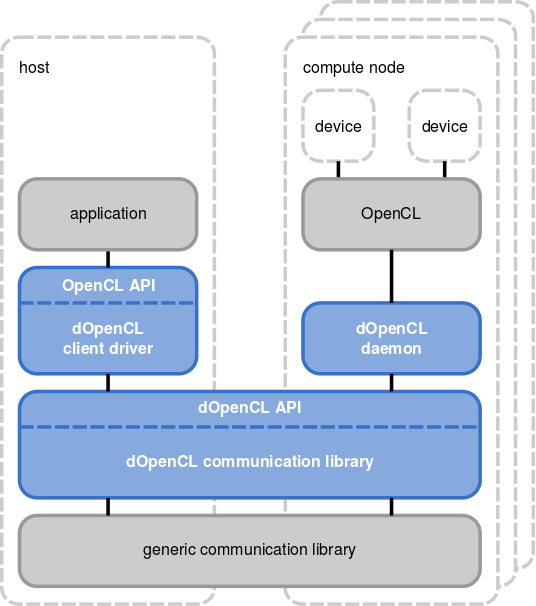 dOpenCL has been developed and tested on the following systems:

The current implementation of dOpenCL requires the Grid Communication Framework (GCF) which is part of the Real Time Framework (RTF).

The dOpenCL source code can be downloaded here:

dOpenCL is distributed in the hope that it will be useful, but WITHOUT ANY WARRANTY; without even the implied warranty of MERCHANTABILITY or FITNESS FOR A PARTICULAR PURPOSE.

dOpenCL is free software: you can redistribute it and/or modify it under the terms of the GNU General Public License as published by the Free Software Foundation, either version 3 of the License, or (at your option) any later version.

Permission to use dOpenCL for scientific, non-commercial work is granted under the terms of the dOpenCL Academic License 1.0 provided appropriate credit is given. Please use Kegel, P., Steuwer, M., Gorlatch, M., "dOpenCL: Towards Uniform Programming of Distributed Heterogeneous Multi-/Many-Core Systems", in Journal of Parallel and Distributed Computing, 73(12), pages 117-126, Elsevier, 2013 for citations and http://dopencl.uni-muenster.de for reference.